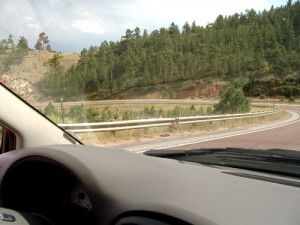 For as long as I remember I always wanted to have a car and drive. First it was one of those little “toy” pedal cars made for children to sit in. Then it was a bicycle (fortunately, I had several during my childhood) and in my 20’s it was a motorcycle (I am glad I didn’t get it since I probably wouldn’t have lived long enough to write this essay!). The last dream  was to have a real car. Way back then, of course, it was an impossible dream for me so I pushed it back into the very deepest corner of my mind and accepted the fact that I might never have a car.

Then, many-many years later, my dream finally came true. I got a car and started to drive.

It turned out to be even better then I’d ever imagined. Having a car was a bliss! It equated to freedom, to power and to self-reliance. That first car became my little “baby,” my comfortable sanctuary. What a wonderful feeling! I enjoyed it tremendously. For a while, at least.

Then a few years later I got a job that involved a lot of driving and sitting in bumper-to-bumper traffic jams. Because mine was an older car, I never really knew whether I would manage to make it back home. Something could go wrong at any moment. And several times it did! Thank God for AAA (roadside assistance service). When it rained, I couldn’t turn on windshield wipers, the heater and headlights at the same time –because the battery would die. There was no air conditioner and several times my bumper fell off in middle of the street! Traffic was another thing all together. My 25 mile commute to work would take on average an hour. If there was an accident it could go up to two and sometimes even three hours!

Needless to say, I grew more and more resentful, unhappy and tense. Driving was slowly turning into a dread and I could empathize with the person who had a custom license plate which read, “H8D405,” (405 being the same of the highway). I was no longer looking forward to driving to work in the morning and back home every afternoon. I was thankful and relieved to simply arrive home safely. After enduring the long commute for a year I decided to quit my otherwise good job and search for something closer to home. I just couldn’t take it anymore!

However, as it often happens, running away from problems isn’t always a best solution. After spending six months on a new job closer to home, I came to conclusion that there was no way in the world I could survive my awful boss any longer – several times he made my cry by his hideous demands and control pressure. So, I ended up quitting that job too. Thankfully, I was blessed and quite fortunate that my previous employer liked me and offered me my previous job.

Now I had a choice to make: to accept a position in a great company with wonderful people, an incredible boss, interesting work – but sit in traffic for two hours every day… or take a chance somewhere else. After lengthy contemplation I decided that the stop-and-go traffic was not such a bad price to pay considering everything else that was going on for me.

And now, I had come to realization that the only real choice left for me was to learn HOW TO ENJOY THE RIDE. And that set me on a path of accepting that which I resisted so much just a year ago.

That was the beginning…

I started looking for ways to get the best out of an unpleasant situation. I used this time to contemplate, to meditate, to listen to music and audio books, relax and deal with emotions when necessary. In the process I made lot of observations, appreciated many revelations and even came to some fun conclusions.

So, from being a “405 H8-er” person I had become a 405 lover (anyone who has spent some time in Los Angeles knows about infamous 405 freeway. There are very few rare occasions when there is NO heavy traffic on it. Like at 5:00AM, for example).

I hope my contemplations and little observations will make your driving as much fun as it makes mine and will help you to gain some other helpful perspectives of life.

One of the interesting things about cars and driving in particular is the fact that one can draw a lot of parallels between cars and people, driving and our lives. By observing different patterns we can learn a lot about life in general and gain some wisdom.

Have you ever noticed all the funny and incredible things people do behind the wheel? Drinking coffee and eating are quite common. In the morning you can see a lot of women putting on makeup and men shaving. I saw several people reading newspapers while driving! Some people have incredible multitasking abilities: they can drive a car, change gears, hold a burger in one hand, a drink in another and control the steering wheel with a knee. Now, this is a real skill in my book. I don’t think I’ll ever reach such an amazing, (or dangerous) level of driving mastery.

Driving habits can give you a glimpse into one’s personality too. I’m pretty sure it generally translates into the way people handle their own lives. We all know about those “time chasers,” right? Trying to gain a couple of extra minutes, they weave in and out of lanes, zipping between cars, changing lanes, frantically trying to get ahead – just to end up behind you. How many times have each of us got caught up in the same frantic mode – running, running, running, always rushing, always trying to get somewhere on time, ahead of others, always afraid of being late, always stressed out and under pressure – just to find out that people next to us arrived at the same spot, at the same time, looking totally relaxed, cool and fresh!

When we find ourselves in this frenzied state, a wise thing to do is just stop. Slow down and assess the general state of our lives. It might not be the easiest thing to do, but the price for not doing this might be even higher.

One of my earliest car accidents happened when I was in this rushing mode. I didn’t slow down on a slippery, rainy day– and sure enough my car skidded and hit an approaching car. Well… That accident DID slow me down considerably. Thankfully, nobody was hurt and the damage to both cars was minimal, but the emotional impact was enough for me to learn my lesson. I don’t rush anywhere anymore. And you know what I discovered? I found that I am almost always on time! Do you recognize yourself as one of these “time chasers?” If so, please slow down – before it’s too late.

And what about tailgaters? What makes them follow somebody that close? Insecurity? Fear of being on their own? Being independent? A need to be protected somehow? I don’t know the answer to this question, although I’ve always wondered about it. It’s one of the most dangerous behaviors on the road and there are so many of them too.

Another interesting parallel. There is much in common between our cars and our bodies. If you think about it from a more spiritual perspective, our body is a vehicle for our souls. Ideally, the soul is the driver behind the wheel of our body and its owner. But how many people spend much more time taking care of their cars than they do caring about their own bodies? Everybody knows that for a car to run well we need to use the best fuel, change the oil  when required, rotate the tires, check the car’s alignment, balance the tires, etc. And yet the very same people would put god knows what into their own bodies. Aren’t our bodies more important than the cars we drive? It’s fairly easy to replace a car when it’s worn out – but try to change your body! Most probably you will have to die in order to do it. Wouldn’t it be great if we could just continue running our bodies for many more miles then we can do now? Should we change our “oil” more often and use the best “fuel” possible? Will it increase the usefulness of OUR physical vehicle? Something to think about, huh?

Running Out Of Gas

One time I was driving to work and the traffic was unusually slow. Most of the time it happens because of an accident. When I got to the cause of the slowness, I saw a car sitting in a middle of freeway. It had run out of gas. That made me think about personal responsibility. A lot of people like to talk about that.

Now, we can’t always predict or avoid accidents. That’s often something beyond our control. But we certainly can make sure that we have enough gas when we set off on a road trip.

The movement of cars on a freeway reminds me of the stream of human consciousness. We’re all moving in the same general direction – a direction of growth, of evolution. Each one of us somehow contributes to this global process because on the level of consciousness we are all connected to each other, we are all part of the same process of an evolving consciousness. If each of us remembers his or her part and takes responsibility for their own growth, for their own development – it helps everybody. We all benefit and we all move in a single, smooth motion. But as soon as somebody drops the ball – forgets to fill up the tank with gas and stalls – we all stop and wait because of this one person. At every moment of our lives we can be either helpers or stoppers. So, which are you?

These are some of my musings about cars and driving. Share your own observations and experiences Let’s have some fun with it!

Nature of pain and suffering

Intimacy and Fear of intimacy

Intimacy is being able to communicate without the fear of being judged and rejected, without…