One of the things I see again and again in my work with couples is the lack of understanding of boundaries and how easily they can be violated. For example, some extremely common questions such as “What’s wrong with you?” can be considered – oddly enough – a boundary violation. Boundary violations are a common source of conflict because when it happens, we feel attacked and instinctively get irritated or angry.

So, what are the boundaries? 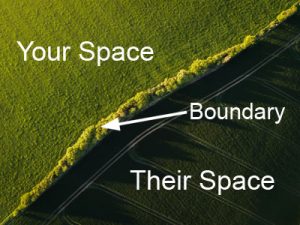 Boundaries are invisible lines or borders which mark where one person ends and another begins. Boundaries can be physical and psychological. Physical boundaries are self-explanatory – it’s basically our skin and any unwanted contact with our body is a boundary violation.

Psychological boundaries are little bit more complicated because they’re invisible. They can be described as intellectual and emotional boundaries. Intellectual boundaries would include opinions, beliefs and thoughts. Emotional would cover everything related to feelings and emotions. For example, asking “Why are you angry?” implies that we KNOW that the other person is angry. We impose our “perceived reality” (that they are angry) on their reality (only they really know what they feel at the moment) and it is a violation of their emotional boundary.

Terry Real, a prominent marriage and family therapist and an author of several books, did a great job of listing psychological boundaries violations in his book, “The New Rules of Marriage.” (And did I mention that I highly recommend his book? 😊)

Yelling and screaming (no explanation is needed)

Communicating that someone is bad or worthless person. Shaming behavior includes ridiculing someone, mocking, being sarcastic, humoring, patronizing, or being condescending.

Telling an adult what he or she should do or think:

Unless you are someone’s boss, therapist, or advisor, you have no right to tell another grown person what he or she needs to do (or not to do). The same applies to telling them what to think, feel or believe. Assuming that we KNOW what other person thinks or feels, (“You just don’t care”) is also intrusive.

Making contracts and breaking them

Manipulating, controlling and “guilt-tripping” and blaming

Deliberately distorting or falsifying information, deceiving another person to gain advantage, or in an attempt to control your partner. Inducing undeserved guilt, for example, “Fine, go out with your friends, I’ll survive.”

So, the next time you’re surprised when your partner suddenly gets very angry or defensive, check yourself. Maybe you violated his/her boundaries?

If you want to cut down on the amount of conflict and live in peace, learn to recognize your own behavior for what it really is.

Want to add something to this list or illustrate your own examples? Add your suggestion in the comments section below.

How to build harmony in relationships

Love should be the foundation of a solid relationship. You love you partner, your partner…

Is my Relationship Abusive?

Once again Jessica cried herself to sleep. Josh, her boyfriend, yelled at and cursed her…

Nature of pain and suffering